The timeline of life of Herschel Grynszpan. Herschel Grynszpan was born in Hannover on 28 March in 1921 as a son of the tailor Zindel and his wife Rivka Grynszpan. His Jewish parents came to Germany in 1911 from western Poland, which had been occupied by the Russian Empire at this time. He grew up as an active member of a Jewish youth sports club and studied at a Jewish school in Frankfurt am Main.

In September 1936 he illegaly entered France to live with his uncle and aunt in Paris. He unsuccessfully tried to make his stay in France legal and lived without any regular job.

In August 1938 the German government decided to expell the Jews with Polish citizenship. In October around 12.000 Polish Jews, among them Grynszpan’s parents, were arrested, deprived of their property and transferred to the Polish borders. Because Poland refused to accept them, they had to stay under terrible conditions in a refugee camp in Zbaszyn.

The attack in Paris

Herschel Grynszpan became very enraged by these events and decided to kill the German ambassador in Paris because he wanted to attract attention of the world public to the Jewish problems. By accident, in the morning of 9. November he shot not the ambassador, but the lower ranked diplomat Ernst vom Rath. Grynszpan was only 17 years old when he did this assassination. The Nazis used this murder as a justification for the subsequent attacks against Jewish communities accros Germany. This pogrom had its climax in the Crystal Night on 9. November 1938. Many Jewish shops and houses were robbed and synagogues were burned by SA troops. About 30.000 Jews were sent into concentration camps, 6.000 of them into Sachsenhausen. Many of them were released after a few weeks or months only to enable them to leave the country immediately.

From November 1938 until June 1940 Grynszpan was in a French prison. After France was defeated by the German Army, he was transferred to the hands of the Gestapo. He was interrogated in the Gestapo headquarters at Prinz Albrecht Street in Berlin. Then he was held in several Nazi prisons, including Moabit prison, and the concentration camps Flossenburg and Sachsenhausen.

Grynszpan had been in Sachsenhausen from 18. January 1941 until Summer 1941. There he got the number 35181. He was held in strong isolation in the so called „Zellenbau“, a prison in Sachsenhausen. In this building, special prisoners were held to avoid contact with other prisoners in the camp. Later he got some privileges like better food and his head was not shaved. The Nazis probably wanted him to look healthy for the planned show trial.

The Nazis, especially the Propaganda minister Josef Goebbels, planned a great show trial with him, hoping to demonstrate his link to a Jewish conspiracy. But Grynszpan himself pretended that he had a homosexual relationship with the diplomat he murdered. Goebbels described this statement as a „shameless lie“ but for the Nazis it was unacceptable to talk openly at the court about sexual relationship between men. Adolf Hitler finally canceled the whole trial and Grynszpan was never sentenced for the murder.

The so called „Zellenbau“ in Sachsenhausen (Foto: J. M.)

Instead, he was sent into a prison in Magdeburg. The following events are not certain but he was probably killed there by the Gestapo. Because of his „VIP“ position in Sachsenhausen and his uncertain fate, some researches assume that he was liberated and lived in France with a new identity.

In 1960 the court in Hannover officially declared him deceased. 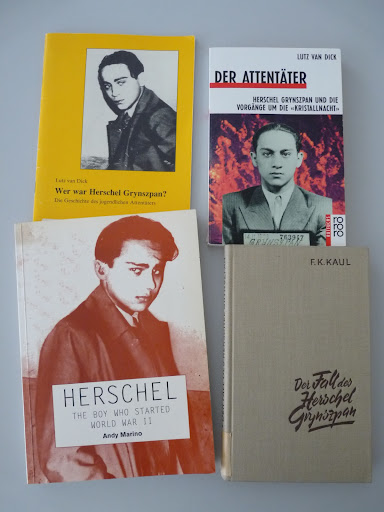 Some of the books about Herschel Grynszpan (Foto: J. M.)

To a foto of the native house in Hannover (second on the right hand).

To a foto of Herschel Grynzspan at school in 1930 (first row, first person on the left hand).

To a foto from the day, when he was arrested (with his aunt Chawa).